A New Lithium War Is About To Begin

Demand for lithium is soaring, and producers are frantically searching for new sources of supply. Prices have doubled in the last two years, rising as high as $16,500 per ton.

By James Stafford | Via OilPrice.com

It’s the modern gold rush. Around the world, the most sought-after mineral isn’t a precious metal, nor is it oil and gas…it’s lithium.

Lithium, or “white petroleum” as some call it, has become a crucial element in today’s high-tech economy.

Demand for lithium is soaring, and producers are frantically searching for new sources of supply. Prices have doubled in the last two years, rising as high as $16,500 per ton. 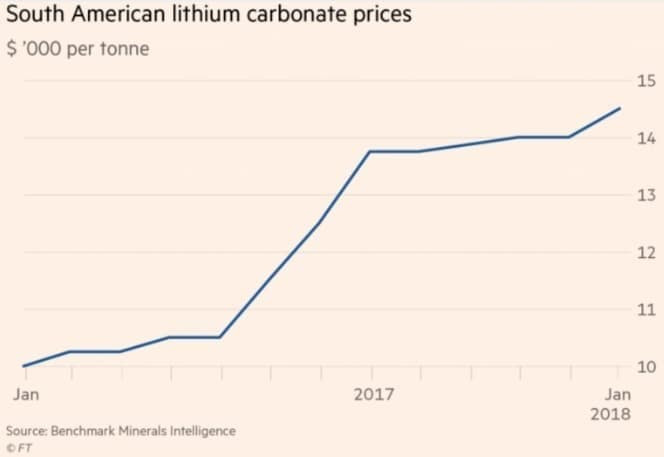 The biggest reason for the surge? The immense demand for lithium-ion batteries needed to power electric vehicles (EV), cell phone and wind turbines.

As the Wall Street Journal reported, the surge in demand has pushed lithium miners to new areas in search of rich deposits.

Traditional production of lithium and lithium-ion batteries is concentrated in a few key areas, but with demand set to increase dramatically in the coming years, investors are searching for creative new ways to increase global supply.

The fact that China is trying to corner the market has made the search for new deposits even more intense, as U.S. and European firms try to get around Chinese domination.

For the last five years, the commodities world has focused on the epic showdown between OPEC and U.S. shale drillers for oil market share. But it’s the war over “white petroleum” that will dominate the next decade.

In January, Zion Market Research projected lithium-ion battery sales to grow at an annualized rate of 13.7 percent, rising to $67.6 billion by 2022.

China anticipates demand for lithium batteries to soar in coming years—mostly because they believe demand for electric vehicles (EVs) will exceed demand for gas-powered cars by 2030.

But the Chinese may be in for a surprise, as new mining companies secure deposits of lithium outside of South America.

Going Around the Chinese Wall

The Chinese may be investing heavily in South American lithium production in order to corner the market, but European and North American firms are side-stepping the Chinese autarchy to secure supplies of their own.

Europe uses 25 percent of the world’s lithium, while European auto-makers are anticipating a surge in EV production as the continent shifts away from gasoline-powered cars.

In North America, miners are exploring for untapped lithium deposits that could rival the big finds in South America. Canadian miner Quantum Minerals Corp. (TSX-V: QMC) has expanded its Lithium Mine Project in Manitoba by 100 percent.

Another Canadian outfit, Nemaska Lithium Inc. (TSX: NMX) is hoping to exceed its current rate of production (16,000 tons) by 20 percent this year. The probable reserve of its property in Quebec is estimated at 24 million tons, which means it should have no problem reaching its production goals.

Nemaska has been a big winner on the lithium market: it rode its discoveries at their Whabouchi property in Canada to a $1.9 billion valuation.

Power Metals Corp, a hard-rock lithium driller is sitting on a deposit that could be worth billions. Rather than mine lithium through evaporation, which is very time-consuming, Power Metals uses drilling to tap into deposits of lithium spodumene trapped within the rock.

Canada could become a key source of lithium—which is good news for North American industry that may be losing access to Chinese lithium batteries.

One Door Closes, Another Opens

A trade war has broken out between China and the United States. While that’s bad news for some industries that rely on Chinese imports, its good news for North American lithium miners like Power Metals and Nemaska.

In early April, the U.S. government slapped a big tariff on imported Chinese lithium batteries, part of a tariff on Chinese goods worth $50 billion.

That means that lithium miners will see a bigger market for their products—and a surge of investment into North American mining, which has the lowest risk factor in the world.

China may be cornering the market on South American lithium in order to feed its battery factories and churn out electric cars, but protectionist policies by the U.S. and aggressive expansion into European lithium production may cut the Chinese out of the global battery market.

Booming demand for lithium could be fed by the lithium mines of Canada—turning junior miners into major players virtually overnight.

Power Metals has announced a 15000m drilling program for 2018. “The explorational upside is immense,” according to Dr. Julie Selway, the company’s hard-rock lithium expert, “and each drill target can substantially increase the overall resource size.”

Canadian lithium deposit, according to Selway, represents a “sleeping giant:” once tapped, it could provide enough lithium to satisfy North American demand.

Just as the world of oil has seen intense competition between OPEC and U.S. shale, the lithium world may be defined by its own war: China vs. Everyone Else.

In this new gold rush, it pays to be prepared for anything.

Other companies transforming the lithium the space:

FMC Corp. (NYSE:FMC) founded in 1883, FMC has been around the block and back. FMC has a long history stretching between many different industries, but within all of them, FMC has remained a leader in innovation.

FMC’s involvement in the lithium industry is particularly notable. The company is one of the top three in lithium and associated technologies. It is one of the largest suppliers into electric vehicle applications using lithium hydroxide.

Strong growth in lithium is expected to drive margins for FMC and major expansion, leading analysts to give it an outperform rating. The company’s full year 2016 results were impressive, with lithium segment earnings of $21 million—up an amazing 90 percent from Q4 2015.

Magna International (TSX:MG) (NYSE:MGA) is based in Aurora, Ontario. The global automotive supplier is gutsy and innovative–and definitely tuned to the obvious future–clean transportation. A great catalyst is its development of a combo electric/hydrogen vehicle–a fuel cell range-extended EV (FCREEV). It’s not going to produce them (for now, at least) but plans to use the model to show off its engineering and design prowess and produce elements of the electric drivetrain and contract manufacturing.

The company’s auto parts are distributed to heavyweights such as General Motors, Ford, Tesla, BMW, Toyota, Volkswagen and Chrysler. These huge deals provide a safe and steady profit stream for the company. It’s insightful, forward-thinking and smart value/low cost for shareholders.

Tesla Motors Inc. (NASDAQ:TSLA): No large cap company has dazzled over the past couple of years like Tesla, which overtook giant GM this year in market cap—a major, unexpected feat. Tesla is the future, and its stock price agrees.

Tesla’s electric cars will eventually be more profitable than traditional cars, and easier to produce. Costs will keep coming down, especially now that Tesla’s has launched its battery gigafactory in Nevada, and when it gets battery (and lithium) prices down.

It is entirely feasible that Tesla will be selling over 2 million cars annually in less 6-7 years from now.

General Motors (NYSE:GM) is a household name. GM was born at the turn of the 20thcentury and has been a leading innovator in the automotive industry ever since. Even though it’s been surpassed in market cap by Tesla (of all companies), it is still the furthest ahead of the Big 3 car makers from Detroit in terms of EVs and self-driving cars.

Recently, GM acquired Cruise Automation—a self-driving car company, and it seems determined to forge ahead even faster to play catch-up with the future. Additionally, GM is a leader in the booming electric vehicle market. As countries across the world begin to pass regulations on combustion engines, GM stands to gain significantly as an early adopter in the EV game.

Alphabet (NASDAQ:GOOG): With a market cap of over $657 billion, this is the second-largest by market capitalization in the S&P 500. We love Alphabet because its foundation is intellectual property—not tangible assets.

Oh, and self-driving cars … definitely a huge part of the innovation in energy and artificial intelligence. As an early entry into the self-driving car world, Alphabet’s innovations have paved the way for a transportation revolution.

Alphabet is set to continue to bring value to its investors and even as one of the largest companies in the S&P 500, Google’s parent company continues to reach new heights.

James Stafford is the Editor of Oilprice.com

This article was first published in the Oilprice.com, and is being reproduced under a special arrangement. Click here to go to the origina.

Digital Storytelling Can be a Powerful Tool for Water Researchers

Diplomacy Watch: Divisions Flare in the West as Winter Looms

As energy prices rise and temperatures drop, the European public is feeling squeezed by the Ukraine war’s secondary effects.